Splendor of the Sunset: Iran of the Qajar era 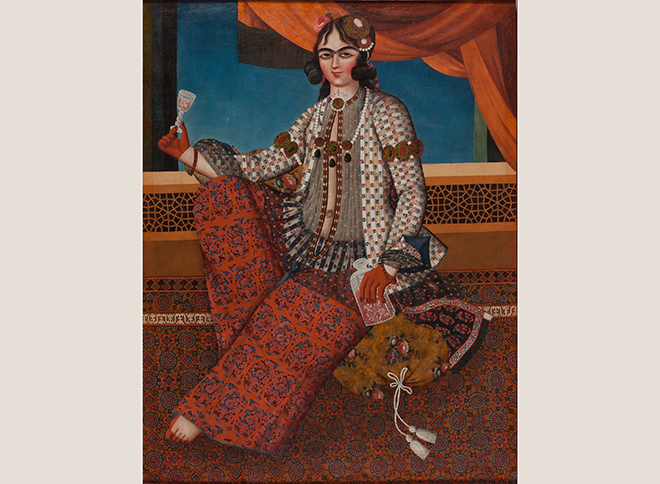 Ministry of Culture of the Russian Federation

The State Museum of Oriental Art

The State Archive of Russian Federation

The exhibition introduces to the Russian public a little-known page of the Persian art and history. The rulers of Qajar dynasty came to power in the last quarter of the 18th century after a long and bloody internecine struggle. By the middle of the 19th century they completed the reunification of the country but were unable to overcome its economic backwardness and resisted European colonial expansion. The Qajar period can be claimed as the era of decline of Iranian former glory due to increased external pressure from Russia and Britain,economical crisis,territorial losses and social tension.

European influence, technical innovations, reformist ideas and modern tastes penetrated the country and need for change and the importance of the education became obvious. But the inevitable influence of the West in the current international situation did not destroy the Iranian national spirit and loyalty to traditions. Two main trends in the culture of the Qajar era – an interest in modernization and European achievements and a worship of one's own history, the glory of kings and mythological heroes of the past, – created a new cultural model, where archaic and unexpectedly modern were closely intertwined.

For the first time in Russia, more than 300 items from the richest Iranian collection of the Museum of the Oriental Art: paintings, ceramics, weapons, carpets and manuscripts, historical documents and photographs will be collected in one space. The exhibition will be supplemented with exhibits from the State Archive of Russian Federation, the Marjani Foundation and photographs from the Kunstkamera. Most of the objects are published and exhibited for the first time. The exibition is divided into a number of thematic sections and explored different aspects of the life of Iranian society of the 19th – early 20th centuries: politics, and art, war and hunting, religion and everyday life. Naive, charming, colorful and life-asserting Qajar art cast a gleam of astonishing splendor and fabulous fantasy at the sunset period of the Iranian Middle Ages.

The collection of Qajar art of the State Museum of the Oriental Art is one of the richest in the world, along with the Louvre, the Victoria and Albert Museum and The State Hermitage.

Additional Information about the exhibition: press@orientmuseum.ru